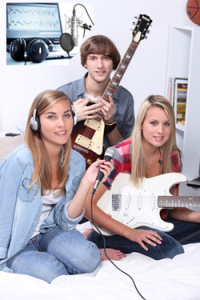 People often talk of building a home recording studio. The fact is – you can set up a home studio capable of recording and producing professional quality music, voice-overs, podcasts, video narrations, etc. without building a single thing. All you really need is a decent microphone – which is probably way less expensive than you think – and a way to hook the mic up to your computer, which can be either directly via a USB mic, or through an audio interface. The latter will ultimately be the more professional way to go, giving you cleaner and better sound.

Here is a 2-part video series that will walk you through how to set up your own home recording studio without having to build a darned thing.

How to Build A Home Recording Studio – Part 1

How To Build A Home Recording Studio – Part 2

Hey everyone! I wanted to let you know, before the weekend in case you have big plans to start doing some awesome music or voice-over recording, that the 5th and final article in the series has been posted.  You can see that post, which discusses recording accessories like mic stands, cables, pop filters, shock mounts, etc, at this link: www.homebrewaudio.com/how-to-build-a-home-recording-studio-part-5-accessories

If you have not already read the first 4 articles in the series, you can start on part 1 here: www.homebrewaudio.com/how-to-build-a-home-recording-studio-part-1

The idea here is to show how easy it is to put together an inexpensive computer-based home recording studio capable of recording and producing professional quality audio, quickly and easily.  If you have a computer, and I’m not talking about a high-end-super-fast one, then you already have a bulk of what you will need.

If you plan to do primarily voice recording for, say, voice-over jobs, video narration, podcasts, etc, the only other thing you need is a good USB mic (not the headset kind – you want a large one) and some software.  For entry-level professional quality, a mic like the Samson C01U will cost around $75-80.  You can get started in the software department for free by downloading Audacity.  For a big step up though, I always recommend Reaper, whose 30-day trial allows you to keep evaluating for as long as you need to (even beyond 30 days) and will only cost $60 for the discounted license.  You’ll have to read about their insane fair pricing scheme here – www.homebrewaudio.com/how-to-build-a-home-recording-studio-part-4-software.

Basically this all means that pretty much anyone can afford to buy the things needed for a pro home recording studio.  I so wish that had been true 20 years ago.  Sigh.

Here is a post that is the first in a series explaining not only how to build a home recording studio using your computer, but also how to get the best possible audio quality from it for the least cost.

These posts will explain two types of gear configurations and offer 4 tips for creating the clearest and cleanest audio possible. You’ll also learn how to step into the “professional quality audio” level by using the 4 tips and a microphone costing less than $100.

You’ll also see how home recording studio configuration 2 is the foundation for even the highest-end professional computer-based studios, and how you can enter that world for as low as about $250.

See the part 1 of the series here: How to Build a Home Recording Studio.

I reviewed a very cool little device yesterday that is about the size of a lipstick case, and yet it is a professional audio interface you can put in your pocket (if you need to) and take with you wherever you go.  It’s called the CEntrance (no, that is not a typo) MicPort Pro.

You plug any standard microphone (by “standard” I mean witha  3-pin XLR connector) into one side of the MicPort, and plug the MicPort (via the included low-noise USB cable) into a USB port on your (or anyone’s – since it’s so mobile) computer.

The MicPort has a phantom power switch you can use for your condenser mics.  It also has a headphone input that allows for zero-latency monitoring.  All that stuff is on the tip of one end of the “lipstick case.”  On the side are two knobs, one for controlling the input gain and the other for controlling headphone volume.
It has a high-quality A/D converter and preamp, which puts it into the category of “professional recording” in my book.

I recorded two audios, one with my usual set-up and one with the MicPort.  Both used my Rode NT2-A microphone.  Those two audios are on the full review, which can be found here:
www.homebrewaudio.com/review-of-the-centrance-micport-pro-audio-interface/

Folks were asking how the guitars and bass were recorded for the cover of That Thing You Do that I put out last week.  They wanted to know if I used amps, and if so what kind.  Also folks were interested in what microphones I might have used on the amps in question.  Well as it turns out, I didn’t use an amps at all.

I used fake or modeled software versions of amps.  I did this with a hardware/software combo called the POD Studio GX, by Line 6.  It’s a small interface box that hooks up to your computer via USB.  The interface has an input (standard quarter-inch plug) for a guitar or bass.  POD Studio also comes with POD Farm, which is huge collection of guitar and bass amplfier models.  The Line 6 site describes the collection as an arsenal of vintage and modern amps, cabs, studio-standard effects, classic stompboxes and preamps.

If you were wondering whether it was possible to record a song, specifically a rock song, on a (very) modest home recording studio, take a listen to this.  It’s a 1-man-band cover of the song That Thing You Do, (written by Adam Schlesinger for the movie of the same name) recorded from scratch on my computer-based home recording studio set up in a spare bedroom.

Why did I do it (other than just being cool)?  I wanted to demonstrate what kind of thing can be done, by just one person, with a basic home music recording studio.

New equipment for your home audio recording studio is being unveiled every day. You can keep informed of all new arrivals for pro audio gear as it arrives at B&H Photo-Video-Pro Audio by checking in with us as often as you like.  The link will take you to the B&H page for just pro audio gear, and just the absolute latest newest releases.  They update it every day.

Here is the page to bookmark: http://www.homebrewaudio.com/new-arrivals-pro-audio-equipment

Also don’t forget that we have tons of tutorials and “how-to” articles at Home Brew Audio.  Those we update pretty much daily as well.

It is very handy to know how to quickly and accurately cut, copy and paste audio.  It’s especially useful when dealing with music.  You can slice up a song to make it longer or shorter, or if you are recording your own song you can copy bits that are particularly hard to play or sing, but that repeat throughout the song.  Just play it right one time and then copy and paste it whenever it needs to appear in the song.

One very helpful tool for doing all of this is the “snapping” tool in any audio editing software.  This allows you to ensure that cuts and moves are musically correct.  See how to use the snapping tool to do this in the article here: http://www.homebrewaudio.com/how-to-quickly-and-accurately-cut-copy-or-paste-parts-of-a-song

Well as with anything else, the more you know about something the better you can usually use it to get the most out of it.  In this case it might be important to know if you have a cardioid mic if you do voice-overs and would like to get a deep, bass-y sound out of your voice without having to futz with EQ or other audio effects.  With a cardioid all you have to do is get your mouth closer to the mic and take advantage of the “proximity effect.”  Or maybe the sound has too much bass.  Then you’d know that getting a bit further from the mic will make the audio sound even less bassy.  This knowledge can be really handy.

Maybe you want to do stereo recording but don’t have a stereo mic, or don’t have two of the same model of mic.  If you have a cardioid mic (most mics) and one capable of figure-8 (or bi-directional mic) recording, you can make use of mid-side stereo recording.
Find out about all these things in the latest article at Home Brew Audio: http://www.homebrewaudio.com/directional-and-omnidirectional-microphones-what-are-they-good-for

One of the coolest things about pc-based home recording studios is the wide-open world of virtual instruments.  And of all the different kinds of instruments we can play via MIDI on our computers, drums are probably the most used.  And why not?  You can have a drum track on your song without even touching a drum.  Technically you don’t even have to know how to play drums (though I think it helps a LOT if you can) in order to have them in your recordings.  And perhaps the biggest benefit for my wife – I don’t have to make all the racket in the house that a drum kit would create.  This is also a plus if you live in an apartment and drums would generate neighbor complaints.  One of the down-sides to all this is that it’s actually fun to play drums for real!  But finding a place for the kit to live is hard if you don’t have a lot of space in your house.  Plus, even though it’s a lot of fun to play drums, recording them is typically not easy.

In order to record live drums, not only do you have to have a kit (space issues), and a drummer good enough to be on your recording, you have to have a bunch of additional microphones.  For example, the kick drum needs a certain kind of mic (like an AKG D 112, for example) that is very different from the snare drum (typically a Shure SM57 or two), which is very different from what you’d need for overheads (2 large diaphragm condensers like the Rode NT2-A).  So by using virtual drums, you’re saving yourself a lot of money for mics if nothing else.

So what is virtual drumming anyway?  Well, if you’re recording a song, you can load up a software plug-in/program (into your multi-track recording software like Reaper), which contains recorded samples of actual drums (usually – though there are synthesized drum programs as well), and have your computer play these drums via MIDI.  It’s like having a drum machine inside your computer.

There are several different ways you can build a drum part.  For those of us who are control junkies, you can do it like me.  I like to build my tracks one measure at a time using my MIDI keyboard.  Drum programs will typically assign each drum in a kit to a specific key on a MIDI keyboard.  See Figure 1.  I will turn on the metronome in Reaper to keep me on the right tempo, and play, say, the kick (bass) drum part for a measure or two by simply playing the “C” key on my keyboard.  Then I’ll do the same for the snare drum part, using the “D” and “E” keys […]