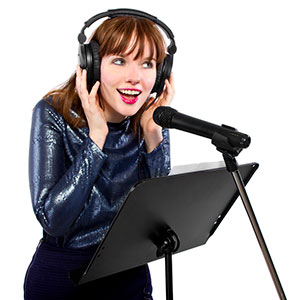 You need a voice recording studio of some kind if you plan to get into doing voice overs. With technology being what it is in 2017, it’s pretty easy and really affordable for just about anyone to do.

Of course that is part of the problem, in a way. If anyone can record voice overs at home, then a LOT of people can jump in and call themselves voice actors. It increases competition by a lot.

So how can you stand out?

I’ve been on both side of the voice 0ver market – providing the voice, and also hiring someone else to do it. When I’m doing the hiring, the second thing I asses is the quality of the recording. the FIRST thing I check is whether the potential VO read the job posting and recorded what I asked for. Too often, people just blast out a generic demo reel. I don’t even listen to these.

Once I narrow the auditions down, I listen for the quality of the audio. This is where you can stand out.

The Right Equipment for Your Voice Recording Studio

You don’t need to use a lot of expensive voice over recording equipment, but you do need to know some things about how to use what you DO have.

The important thing is to get a clean recording, free from ANY noise. Most people understand the need to not have barking dogs, or lawnmowers in their recordings. But you’d be surprised at all the other kinds of noise that can prevent you getting a voice over job.

Probably the most common kind of noise is hiss in the background. This is often due to using a USB mic. Other common culprits are air conditioning vents, computer fans, and any number of electronics issues. That kind of noise is fairly easy to handle with noise reduction in most audio programs.

Another kind of noise is harder to hear unless you wear headphones. And then they really stick out – and not in a good way. I am referring to mouth noises. These are usually things like saliva clicks, tongue and lip smacks, p-pops, etc.

Again, with the right knowledge you can get rid of that kind of noise with software. Here is a good article about how to get rid of saliva noises – How To Remove Saliva Noises From Voice Recordings.

So what about that voice recording studio gear I mentioned?

You CAN get clean recordings on a budget, using a good USB mic like a Samson C01u (for about 80 bucks). But you’d have to spend more time cleaning up the noise. So I recommend using a standard microphone – the kind with the 3-pin plug. A good one for voice recording (at least to start) is the Audio-Technica AT2035 for about 80 bucks (this one comes with a stand and pop-filter). This kind of mic is great for vocals and is called a large diaphragm condenser mic.

Now you need something to plug the mic into – an interface box. These units plug into your computer via USB (sometimes thunderbolt, etc.). Then you plug your mic into the interface box. One good suggestion is the Focusrite Scarlett Solo, for about $99.

Honestly, I think you can do everything needed with a free program called Audacity. It’s pretty amazing. If you need to do several tracks of different voices, or anything complex, you might want to consider something like Reaper. But the quality of the audio is not really affected by the software very much. So why not start with “free?”

That is really all you need – at least to start – for your voice recording studio. You will want some kind of headphones too. But most people have those already.

As for the knowledge of how to do some of the editing I mentioned, check out the videos from The Newbies Guide To Audio Recording Awesomeness here:

This site uses Akismet to reduce spam. Learn how your comment data is processed.